After the dreadful disappointment of last year’s championships, I am delighted to report that all the students who made it through to the training were selected to be ball boys and girls for this year’s Wimbledon Championships.  Huge congratulations go to Lola Fisher and Chanel Lovelock (Year 10), Stanley Barrett, Daniel Bamba and Rory Edwards (Year 11) .  They all remained at Wimbledon until the last Saturday with Rory Edwards being selected to take part in the mens’ final Guard of Honour on Sunday. The commitment, determination, resilience and hard work that they showed throughout the months of training leading up to their trial and championships was phenomenal. They have all done themselves and the school proud.  I know that they had an incredible time and enjoyed every minute and I am sure that they will talk about their experiences for years to come.

A heartfelt mention must go to Daniel Bamba who, although he was picked, due to unforeseen circumstances was unfortunately unable to attend.

Chanel Lovelock was interviewed by The Sunday Times Magazine, please enjoy reading the interview below:

No 181 is 14-year-old Chanel Lovelock one of this year’s new recruits.  She is in Year 10 at Sunbury Manor, an academy school 12 miles from Centre Court.  She never dreamt she could be a ball girl at Wimbledon: “I knew nothing about tennis. I do athletics – I’m a pentathlete.”  One of her teachers, Miss Pacey, had suggested she apply in 2009 “and I was, like, No, Miss, I’m not that confident, I can’t so it “.  This year she plucked up the courage.  Miss Pacey said, ‘Chanel, you have got another opportunity, just do it!’ And I just found myself there.” She giggles infectiously. Is she getting used to being a number, not a name? “I am now, but when I first started they were, like, ‘181!’ and I looked around thinking, ‘Who’s 181? Then I realised it was me and I was, like, ‘Oh, yes sir!’’’

What’s it going to be like at Wimbledon, in front of the cameras and the world? “Oh God,” she replies suddenly terrified, but then she beams. “I think it’s going to be one of the best experiences of my life, 100 per cent, because I’m watching past Wimbledons on TV and thinking, ‘That’s gonna be me soon!’ ”

For the new chief executive of the All England Club, Sally Bolton, the BBGs exemplify all that’s great about Wimbledon.  “They’re such a committed bunch. When you see them walking to their courts – dead-straight line, totally focused, not being distracted by all the crowds buzzing around.  They’re a really important part of the championships.” 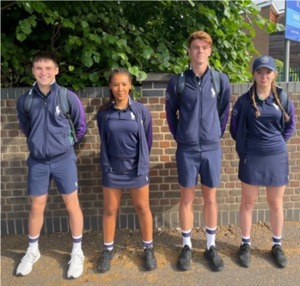 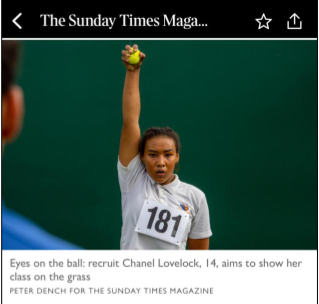