A Side vs B Side

On Tuesday 25th of May the inaugural Year 11 A Side V B Side Football Match was held for the Sunbury Manor Class of 2021 Cohort. A Side was managed by Mr Lebihan and B Side managed by Mr Parcel. The match was officiated be Mr Bocking, who did an outstanding job of keeping the match entertaining.

During the first half the match was fiercely contested, with strong and dominant tackles coming in from both sides. A side began the match on the front foot, and began to press high up the pitch and began to cause havoc for B side’s goal keeper, Nathan Clements. Throughout the first half A side continued to press high into the opposition’s half, creating chance after chance. They managed to break the deadlock on the 25th minute, through a well-timed corner and Hayden Donnelly rising into the air to score a brilliant header. As the half time whistle approached, B side began to create some opportunities of their own, exploiting the space left behind A side’s defensive line. As the half time whistle blew, A side began their team talk full of confidence.

After a dressing down at half time from their manager, B side entered the second half more organised and began to open up the gaps left by A side. Some neat passing in the match led to B side quickly levelling the scoring, through a well-timed shot by Ali Yousif. With the match now level, both teams began to create chance after chance with the very vocal fans and teachers watching a thriller of a match. B side narrowly took the lead once more with a goal from Rory Edwards and began to show more confidence with their game play. As the closing minutes moved closer, A side were awarded a penalty that was saved by Nathan Clements in goal. A side continued to press and eventually Jack Macalister scored a goal to level the match at 2-2.  With the finish line in sight, B side were awarded a penalty which was neatly finished by Ali Yousif. The game continued to be fiercely contested with scores at 3-2 until the final whistle of the game, with B side standing victorious and lifting the trophy.

The game was a thrilling encounter and was played in great spirits by the boys involved in the match. Mr Parcel, Mr Bocking and Mr Lebihan would like to thank everyone involved for their magnificent efforts during the game, the Year 11 students who attended the match to create a special atmosphere and to the staff who gave up their time to attend and support the match. 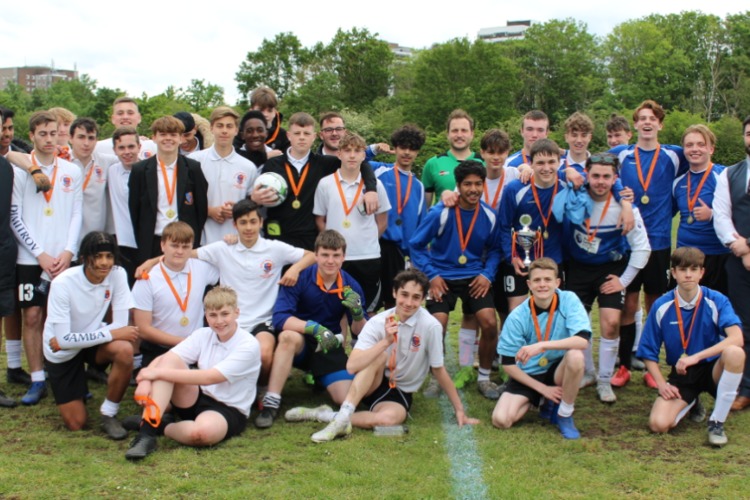