FYI - NEWS BY KIDS FOR KIDS

On Friday 18th October, twelve students from Year 8 and 9 were interviewed by Sky News for ‘FYI’, a news programme directed at young people.  FYI is presented entirely by kids and aims to answer big questions about current affairs and politics.

Some very interesting debates came from their discussions which you can see once it is aired next month. 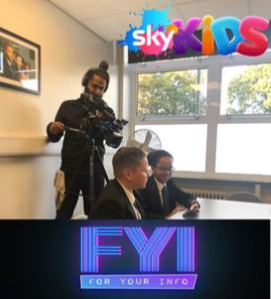