“On 29th April, we played against Matthew Arnold School in the District Cup Final. We got off to a flying start. The first goal came from me (Sigourney) after just a few minutes into the game. We were leading which boosted our confidence!  A further two goals were scored by Lilly and Olivia - thanks to great teamwork and amazing passes.  The girls played some nice efficient football and although we had several opportunities, the balls did not quite beat their keeper’s guards.  Matthew Arnold managed to score, despite Katie and Emma performing well in defence.  The first half ended 3:1 to SMS.

In the second half, we were more determined to win the game.  I weaved through their defence and went on to score a further three goals which were beautifully lined up by midfield and defence, Lilly and Emma.  Charli played amazing football with awesome passes, crosses and made positive attacking runs contributing to the final score.  Caitlin, clearly semi pro, defended amazingly as Matthew Arnold had a number of opportunities to score, but our keeper was not having it and applied her reliable keeper skills, saving any shots that they managed to fire. Overall, it was a very competent performance from the whole team and a dream ending - wining the final 6-1!” Written by Sigourney Dawson

A super proud Mrs Keith said, “Such an amazing success!  Along with this triumph, the girls won the District 7-A-Side and were unbeaten in the league this year. To go a whole season unbeaten is a massive achievement. 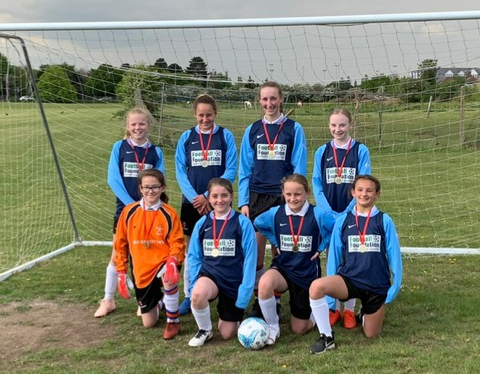