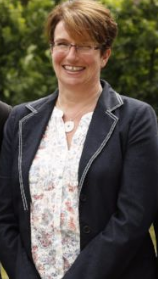 On Tuesday 3rd July, Fleur Felton, Isla Betts and Megan Neall, all from Year 7, interviewed Mrs Duncan on the topic of Inspirational Women, because they believed that women are important to society. Here's how it went:

Who inspired you growing up and why?

Mrs Duncan explained that she thought her primary school teachers were her inspiration. From a young age, they inspired her to become the Headteacher she is today.

What made you want to become a Headteacher?

In her opinion, school is an important place; it is about society in the future. She wanted to become a Headteacher to benefit society and help others.

Have you faced any problems during your teaching career? How did you deal with them?

Mrs Duncan has faced many problems: when she attended her first teacher’s meeting, she wore a black skirt and a white blouse. Due to the fact that she had arrived late, another Headteacher asked her for a coffee, thinking that she was a waitress! Another problem she faced was when she went to manage Springfield School. Several parents said that they needed a ‘strong, brave man to lead them’. However, Mrs Duncan strongly disagreed with this claim, since she thought that all they needed was a determined woman.

How did it feel to be the first pregnant Surrey Head teacher?

Mrs Duncan thought that it was really strange! Due to the fact no one knew what to do, many other Headteachers would either fuss over her or just ignored the fact that she was having a child. Not only that, but having a hungry infant at school events was a huge challenge.

Who do you consider to be an inspirational women today and why?

Due to the fact that she thinks politicians don’t put others before themselves, Mrs Duncan feels that it couldn’t be any of them! Instead, Malala is her inspiration. This is because although she is young she continued to persevere with her beliefs, which was to fight for women’s education in Pakistan. She also feels that Carrie Gracie (a journalist for the BBC) is inspirational, because she resigned from her job after she found out the men were being paid double for doing the same job. After receiving the money she deserved, she gave it all to a charity that focuses on improving women’s rights.

How did it feel to appear in a national woman’s magazine?

Mrs Duncan said that it was so embarrassing and really bizarre. She thought that she was just doing her job, but didn’t mind doing it if it inspired others.

An important message from Mrs Duncan is:

“Do anything you want girls! You can do anything!”

Written by SMS News
Posted on: 16/07/2018
Back to News ListPreviousNext