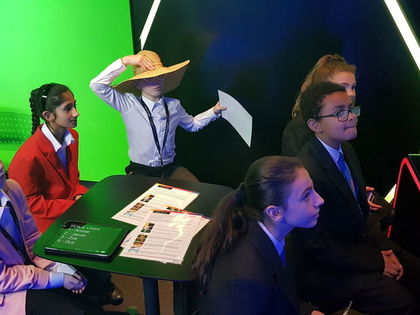 On Wednesday 1st November, some of us went to the Sky Academy in Osterley to make our own news reports. When we arrived, after a short talk about what Sky does, we went on a tour of one of the studios. The studio we went into was the one in which they film the football part of Sky Sports News. We saw all of the lights, which we were told were worth £250 to £1,000 each! We also saw a giant camera, worth £250,000!

We were then split into groups and headed to the Sky Skills Studio, we wrote the scripts for the auto script (that the reporters read off) and went to the dressing rooms to get our reporters ready!

After a few rehearsals, we were ready to record our part of the report, it was all very exciting! We edited our individual reports and sent them to HQ, where they combined them into one report.

Soon, it was time to watch the overall finished report. We all sat together while they showed us what we had created.  We had a good laugh together at the funniest parts, but I think we all agreed it was a great report!

On the way back, we stopped off at the Sky Sports Studios, where the editors work. We saw one of the presenters, who came out to talk to us about what his job involves and why we should try hard at school.

Overall, it was a great trip and we learnt a great deal, I would like to thank all of the staff that made it possible.

Written by SMS News
Posted on: 03/11/2017
Back to News ListPreviousNext