Our first game was against Mathew Arnold and it started off slowly with many attempts at goal, but none of them hitting the back of the net.  Freya Woods had some great shots. The game ended 0-0, but got us ready for the games ahead.  Our second game was against Bishop Wand and unlike the first game, we came out fighting and within minutes Grace Wearn had scored. We went on to dominate the game with Grace Wearn scoring twice and Amelia Witt once - the game finished with a great 3-0 victory.

We felt strong going into the next game against St Pauls with Amelia Witt putting in some amazing crosses which led to Annie Mansell and Grace Wearn getting one goal each, while the defence kept another clean sheet and us winning the game 2-0.

Our next qualifying match was against Magna Carta where our winning streak continued with 3 amazing goals coming from Freya Woods, Izzy Tobin-McGurl and Amelia Witt and again keeping our clean sheet and winning 3-0. This great run got us to the final where we played St Pauls again. This turned out to be our most challenging game with the opposition playing a lot better than they had during our previous match. However, we pulled together as a team and to our surprise beat them with a convincing 3-0 victory, with both Izzy Tobin-McGurl (2) and Amelia Witt (1) adding to their score cards.

This win would not have been possible without the great effort from all the players including the striking force of Freya Woods, Amelia Witt, Annie Mansell, Izzy Tobin-McGurl and Grace Wearn, an amazing defensive effort from Lucy Carvalho, Lily Casserley, Kila Downes-Jones and our star keeper Lissie Williams who did not let in a goal in the whole tournament and only touched the ball twice. Keep it up girls, let’s go far this year. 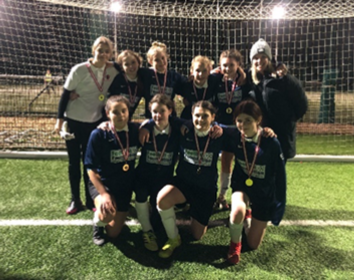