Champions, from the Youth Speaks Local Area Heats, Harish Balasingam, Amelia Joseph-Berry and Rebekah Cloake travelled to the Youth Speaks District Finals on Saturday 7th March 2020. Amelia, who previously won Best Proposer, delivered another passionate speech, arguing that it is smart for teenagers to own a smartphone. Once again, Rebekah opposed her argument confidently and Harish supported and chaired the debate brilliantly. The competition was extremely close and unfortunately the team just missed out on winning the overall trophy. However, the team were awarded with Best Chair (Harish) and Best Opposer (Rebekah)

Sunbury Manor are extremely proud of their team who, in their first year of the competition, stormed to victory in previous rounds of this prestigious event and delivered their best performance in the final. Well done Harish, Amelia and Rebekah!

Miss Batten, and the team, would also like to say a massive thank you to Jessica Cloake, Caitlin Cummings and Jamie Cummings who attended every rehearsal, over the last six months, offering tips and advice to the team. The help and support they have shown their friends is truly commendable and definitely deserves recognition. 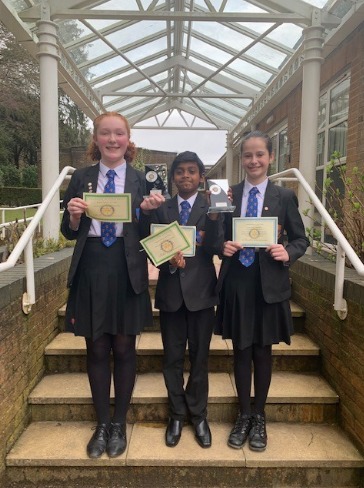