We started the term with our annual Battlefields Trip, so popular this year that two groups of students made the journey to France and Belgium over two weekends in September.  The trips focussed on visiting battlefields and other historic sites linked to events in the First World War.  Our Year 9 students, accompanied by five members of staff, embarked on what was to be a memorable, emotional and enjoyable journey.

After crossing the Channel and settling in to our accommodation, we were able to relax as well as trying escargot (snails) during our evening meal.  Following this, we were given an informative presentation showing many WWI artefacts with students also given the chance to dress up in WWI costumes.

On the Sunday morning, we visited Langemarck and Tyne Cot Cemeteries.  We were all moved by the sight of the many graves of those who had lost their lives during the conflict. A visit to the Passchendaele Museum enabled us to gain an insight into the lives of soldiers during WWI and gain a sense of trench life.

The afternoon was spent visiting Essex Farm Dressing Station and the town of leper (Ypres) in Belguim.  At Essex Farm we visited the grave of Valentine Strudwick from Dorking who died at the age of 15 and listened to the famous poem ‘In Flanders Fields’ at the place it was written by John McCrae.  In Ypres, we had the opportunity to try the famous Belgian chocolate and buy presents for family and friends.

After enjoying dinner in Ypres, we were able to participate in the Last Post Ceremony at the Menin Gate.  The Menin Gate records the names of 54,389 fallen soldiers from World War 1 who have no known grave.  The last post ceremony has been held here every night at 8pm since 1928. As part of this ceremony we were able to lay a wreath on behalf of the school.

Our final visits of the trip were around the town of Arras.  We were shocked to see how the landscape surrounding the Vimy Ridge Memorial still showed the scars of the shelling that had taken place during WWI.  Our second visit of the day was to Wellington Quarry where we were amazed to hear the stories of how soldiers had tunnelled under the town to create the element of surprise during the Battle of Arras.  Our visit to Wellington Quarry allowed us to experience these tunnels and see the underground conditions in which 24,000 soldiers had lived for eight days ahead of the battle.

During both trips this year we were able to locate the memorials to a number of the soldiers named on the Sunbury War Memorial.  Having researched these soldiers as part of our centenary commemorations last year, it was moving to be able to pay our respects and remember their service and sacrifice in the areas in which they lost their lives.

Students and staff alike learnt so much from this trip and will hold the memory of all they saw and experienced for many years to come. 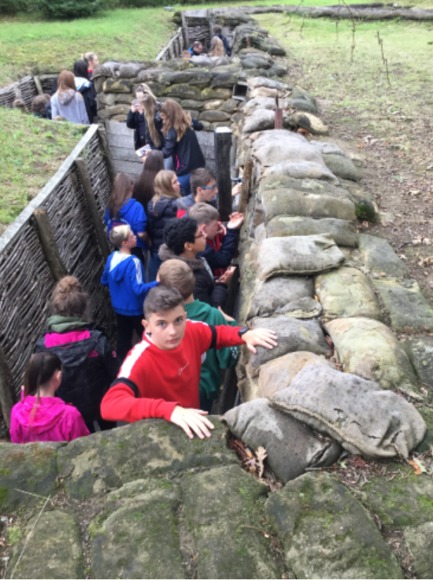