On Thursday 23rd November both of our Youth Speaks teams, who had been working extremely hard on their speeches, were rewarded on the night. The Sunbury Manor Senior Team won and retained the trophy against strong competition, for the third year in a row!  Elizabeth Goodenough also picked up the trophy for 'Best Speaker', so it is on to the next round for them!

The intermediate team just missed out on first place, but Dan McElroy won 'Best Vote of Thanks',.

Both teams, pictured below, really were exceptional and we would like to congratulate all those who took part. 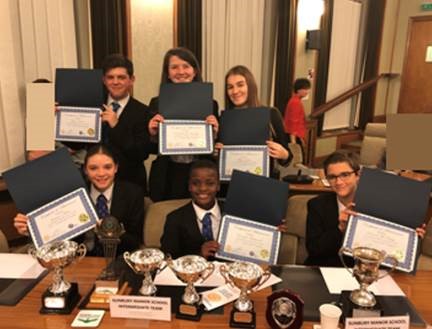 Written by SMS News
Posted on: 24/11/2017
Back to News ListPreviousNext